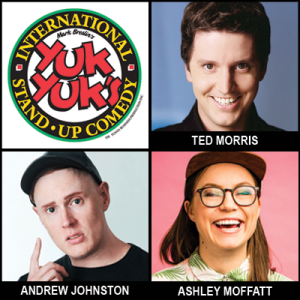 Use promo code PRIDE when buying your tickets & Pride London Festival will receive $7.50 of the ticket price!

Ted Morris always looks like he’s having the most fun in the room when he’s on stage. His intelligent, off-beat humour and wickedly charming smile lets us all know that our slightly warped thoughts are just fine.

Born in Ottawa and now making his home in Toronto, Ted discovered his love of stand-up while getting his degree in veterinary medicine. While he still spends some time working as small animal vet, his comedy career is taking off and he has found that it’s much more gratifying to “kill” on stage. He’s been called “fresh faced and hilarious” and “a real gem” by Now Magazine, and slightly ruder things by strangers in the street.

Ted currently tours Canada working for Yuk Yuk’s, the largest chain of comedy clubs in the country. A favourite of the festival circuit, he has performed at the “We’re Funny That Way” (Toronto), London, Halifax, Winnipeg, Glasgow, Sudbury, Out of Bounds (Austin, Texas), Laughing Devil (Atlanta, Georgia), North Carolina Comedy Arts, NXNE (Toronto) and JFL42 (Toronto) Comedy Festivals, and can be heard around the world on SiriusXM and CBC Radio’s The Debaters and LOL.

His TV appearances include two stand-up specials for Pridevision TV (as both a performer and producer), The Toronto Show, The Comedy Network’s Canadian Comedy Shorts, MuchMoreMusic’s Heat Meter, The Smart Woman’s Survival Guide and The Halifax Comedy Festival on CBC. Ted’s hour-long Comedy Now! stand-up special on The Comedy Network (Canada) debuted in 2012. His web series The Giant Comes Out is currently being developed into a TV series. He is also a nationally syndicated radio columnist sharing his vet wisdom across Canada on CBC Radio, is the featured vet on the international magazine show Steven and Chris airing on CBC and runs a monthly phone-in veterinary advice show on Zoomer Radio.

Noted lesbian Ashley Moffatt is a comedian, writer, and father figure to two small dogs. Winner of the Mark Breslin Award for Stand-up Comedy Excellence, two time Fresh Meat Nominee (sketch & stand-up), and, if you mispell her name “Moffat”, you can find her IMDB page.

You can find her writing on various websites including Reductress, and MATILDA’S (yes — THAT Matilda) twitter because one time she retweeted her. Ashley attended the Humber School of Comedy.

Originally from Brockville, Ontario, Andrew Johnston has quickly made a name for himself as one of the most prolific gadabouts and hottest up-&/or-comers on the Toronto comedy scene. The winner of the Toronto regionals of “The Great Canadian Laugh-Off” in its inaugural year, Andrew was added to the Yuk Yuk’s roster, started touring and has spread both his signature style of comedy and murky-yet-puissant seed from burg to berg. A nominee for the Tim Sims Encouragement Fund Award in 2006 and the Canadian Comedy Awards for Best Newcomer in 2009, he recently competed in The Homegrown Competition at Montreal’s venerable Just For Laughs festival.

You’ll recognize him from his many hours spent debasing Rihanna videos as one of the stars of MuchMusic’s top-rated Video On Trial; committing character assassination on unwitting college-aged kids on MuchMusic’s Love Court; as the severely underused street-reporter on Slice’s Three Takes; artfully discussing the 90’s on Entertainment Tonight Canada; serving reincarnated-Charles Nelson Reilly-realness on The Comedy Network’s Match Game; and as the (brunette) star and creative force behind instant online hit, The Sweater Girls.

An active member in Toronto’s GLBT community, he’s a frequent contributor to fab magazine and Xtra, and currently tours the University circuit with his stand-up-lecture series on anti-bullying. However, he’s best known to Toronto audiences as host and producer of the most consistently buzzed-about live comedy show, “Bitch Salad” – named “Best Queer Comedy Show” by Now Magazine and as seen profiled in The Advocate.