WATCH: Here's how to properly wash your hands according to a technique endorsed by the World Health Organization.

You wet your hands, lather up with soap and rinse away the germs. Washing your hands is pretty straightforward enough, isn’t it?

Scottish scientists say there’s a six-step technique that’s the most effective at killing bacteria. It’s endorsed by the World Health Organization and is touted as better than the one advocated by the U.S. Centers for Disease Control, according to new findings out of Glasgow Caledon University in Scotland.

“Hand hygiene is regarded as the most important intervention to reduce healthcare-associated infections but there is limited evidence on which technique is most effective,” Dr. Jacqui Reilly, lead author, said in a press release.

“This study provides a foundation for effective best practices to implement on the frontlines of healthcare,” she said.

READ MORE: 5 ways to protect yourself from the flu

In the study, Reilly and her team watched 42 doctors and 78 nurses wash their hands after treating patients.

They compared the WHO’s six-step process next to the CDC’s three-steps and found that the lengthier technique killed more germs, but it took longer: about 43 seconds compared to 35.

Here’s what the six-step process looks like (Steps 2 to 7): 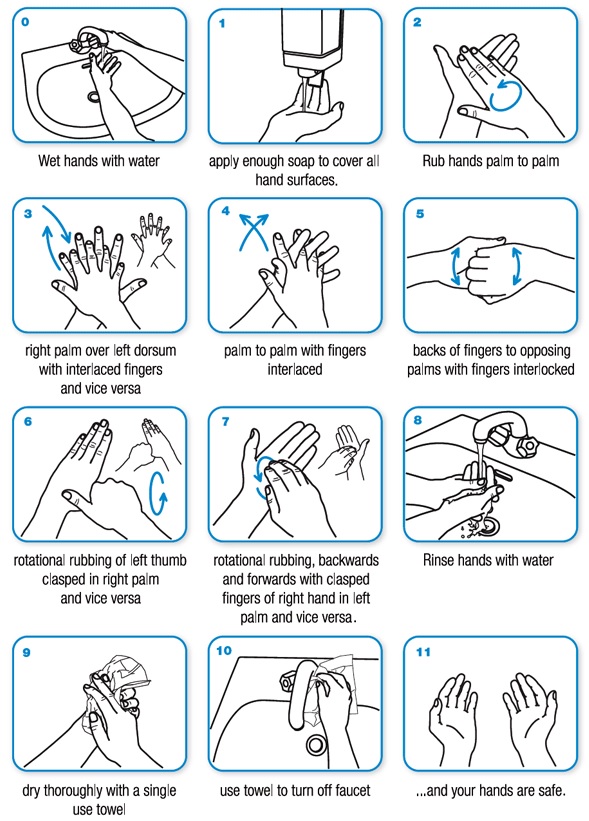 What’s troubling is only 65 per cent of the study participants followed the entire hand-washing process even though the instructions were in front of them.

Other studies revealed just how poor hand hygiene is: in one Michigan State University paper, scientists found that only five per cent of people who used the bathroom washed their hands long enough to kill germs that can cause infections.

It takes about 15 to 20 seconds of vigorous hand washing with soap and water to effectively kill germs, according to the CDC. But the Michigan study found people were washing up for about six seconds on average.

As a rule of thumb, Dr. B. Louise Giles tells parents to teach their kids to rinse their hands with soap for as long as it takes to sing Happy Birthday or Twinkle, Twinkle, Little Star so they’re thoroughly washing up.

“We know germs are on hands and with good hand washing – using soap and warm water – you’ll reduce the risk,” Giles, a Canadian doctor and pediatrician at the University of Chicago’s Comer Children’s Hospital, explained.

Soap and water work best but if you must, use anti-bacterial hand gel. In that case, make sure you aren’t using just a dime-sized amount. There has to be enough liquid to coat your hands.