Going on vacation is supposed to be a time to unwind and relax, but what happens if the experience you get is anything but relaxing?

We all have those little annoyances that can get on our nerves so much that they put a damper on our travels. But what exactly are the most popular among Canadians, and how do these preferences reflect on Canadian travellers?

READ MORE: Paris could take away 43,000 Airbnb listings by June – here’s why

From barefoot travellers to rowdy hotel guests, travel booking website Expedia reveals the travelling pet peeves that have the power to ruin any getaway or travel experience for Canadian trekkers in their annual Airplane and Hotel Etiquette Study.

“The study reveals Canadians are quite particular when they travel,” says Christie Hudson, head of North American communications for Expeda.com. “For example, complimentary Wi-Fi is critical when choosing a hotel, most Canadians prefer a window seat, and bigger chain hotels are the go-to for accommodations. We also see that Canadians are looking for some of the same things in their travels as other countries, like the best price when booking a flight or hotel.”

This year’s report differs from years’ past because this time around, the folks at Expedia wanted to also learn traveller’s preferences and not just their annoyances, Hudson says.

“Around the world, price and associated fees remain one of the biggest factors we all take into consideration when booking a flight or hotel, but that doesn’t mean we want to sacrifice a good experience,” she adds.

Perhaps one of the biggest themes of the report surrounds “inattentive parents.” This proves true for both air travellers (41 per cent) and hotel guests (46 per cent) who say parents who let their children run wild in these settings can really impact their travel mood for the worse.

Don’t be surprised if you encounter this scenario on your trip, travel expert Claire Newell of Travel Best Bets says, especially if you’re travelling during busy times like Spring Break, summer break and Christmas break.

Instead, come prepared by packing some noise-cancelling headphones or ear plugs, for example.

But whatever you do, do not discipline other people’s children, Newell warns. Instead, flag down a flight attendant or call the hotel concierge, should the noise not let up. They may be able to talk to the parents (or other people) involved to let them know their behaviour is being disruptive.

These tips, however, can be applied to any of the two other types of hallway disruptors you can often find in your hotel.

Among the type of most annoying hotel guests are the “hallway hellraisers,” who are usually round running up and down the halls. It’s these types of guests who really put a thorn in the side of 47 per cent of Canadians.

The other type is the “in-room reveller.” According to the report, 45 per cent of travellers cannot stand it when another nearby hotel guest brings the party back to a hotel for the night.

So what do these preferences reveal about how Canadians like to travel, and how the rest of the world sees us?

According to Newell, it really does all come down to comfort. And this isn’t a bad thing, she says, because the preferences of Canadian travellers are very much in line with those of travellers from the rest of the world.

“Nothing on this list was surprising,” Newell says about her initial reactions to the results. “I think when people travel they want it to be smooth, seamless and they want to get some peace and quiet — particularly when they’re going on a vacation.”

As for whether she sees travellers growing antsier in the future thanks to changes in how people are forced to travel (i.e. less leg room on flights), she doesn’t think it will get any worse than what we’re seeing now.

“Airlines have now gotten to as small of a seat as they can go,” Newell says. “Hopefully they won’t get any smaller, but the whole process of travelling is stressful for people. There are lineups every step of the way. You’re dealing with small spaces – but I don’t see it getting any worse.”

Bottom line, Newell says, just make sure you’re prepared and you anticipate what you’re getting into. There’s just as much responsibility on you as a traveller as there are on others, she points out.

Check out additional highlights of the report below. 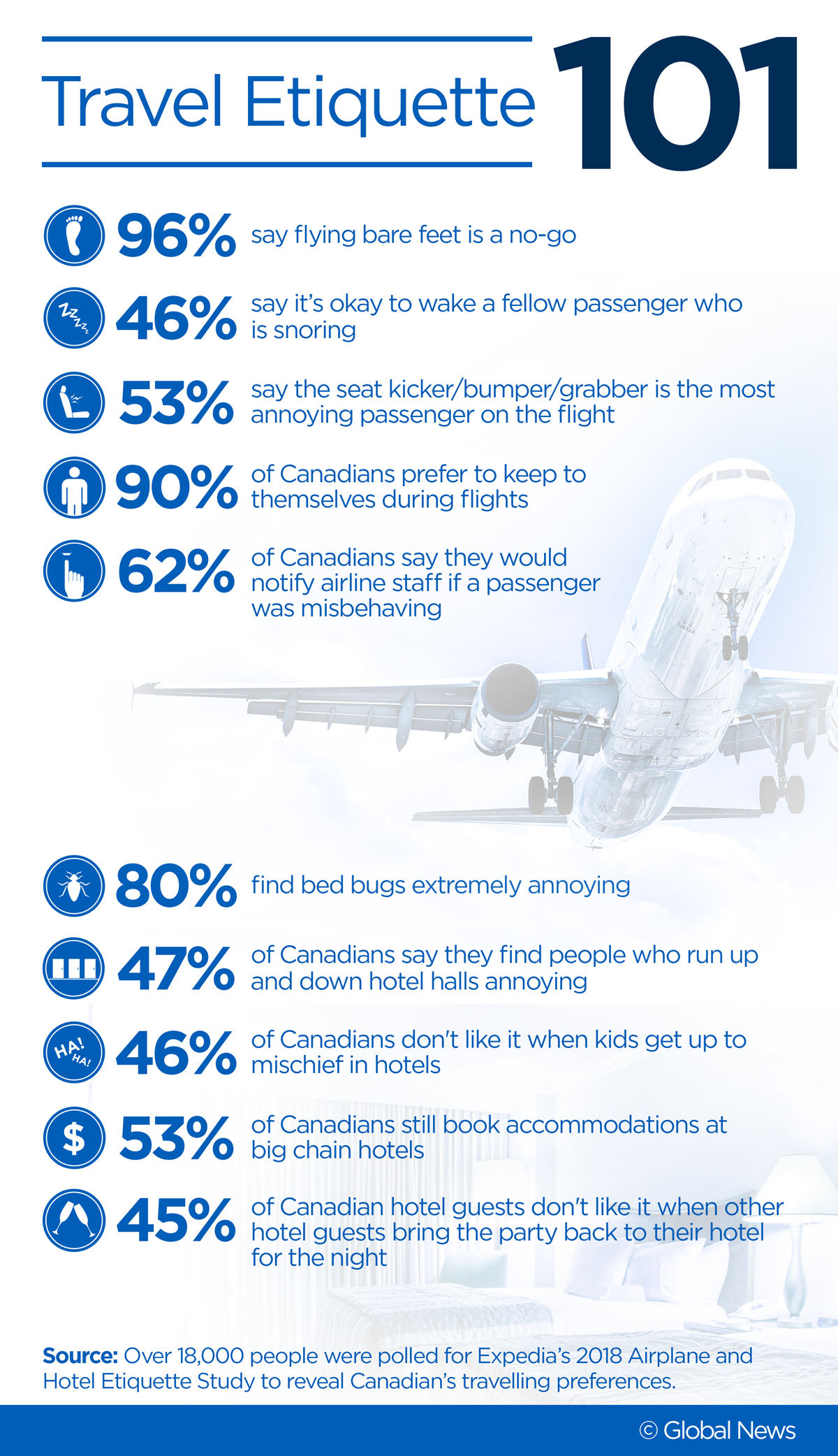