WATCH: Where do people of colour fit into the yoga conversation?

A yoga class might involve the sound of low-tempo music echoing throughout the room, individuals sitting apart in silence and very dimmed lights. But for some people of colour, it’s impossible to find others who look like you in the room.

That’s what Kim Knight and Shanelle McKenzie realized when they tried to practice yoga in major cities like Toronto, Montreal and even Los Angeles.

“There was a lack of representation in those spaces,” said McKenzie. “And nobody talks … nobody interacts or cares to know who you are.”

“And at the end of the day for me, I don’t get anything out of that,” she said.

Knight and McKenzie both said being the only women of colour in the room made them feel uncomfortable and isolated.

“We were like wow, this is super white,” said Knight, which she found strange because she knew many people of colour invested in wellness.

“Where are they? Why are we not seeing them as teachers … why aren’t we seeing them more in these spaces?”

In the spring of 2017, the two Black women decided to create their own space for women like them. They started a wellness company to support women of colour called The Villij in Toronto, a centre for everything from yoga to organized walks. 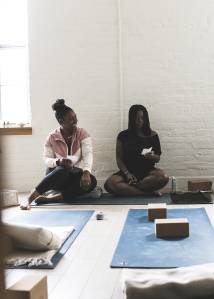 The Villij charges $25 for a yoga class, but let women who can’t afford it to pay what they can instead. They rent their studio space in Toronto and also host pop-up classes in Montreal.

“These spaces are meant to encourage wellness,” said Knight. “We wanted to restructure what that would look like physically for women of colour.”

Yoga is more popular than ever in North America, with one in every 15 people in the U.S. practicing it, according to a 2012 study in the Yoga Journal. The same study found 80 per cent of people who practiced yoga were white.

The most recent data from Statistics Canada in 2005 found 1.4 million Canadians practice yoga, but this was not broken down by ethnicity.

Yoga dates back to ancient India and appears in texts within Hinduism, Buddhism and Jainism and many other cultures.

Regardless of the numbers and origins, yoga has been adapted to many forms by various teachers. You can find everything from hot yoga to puppy and goat yoga to even yoga that infuses popular music.

Yoga is also debated in terms of cultural appropriation in the West and some people of colour even “quit” it for these concerns.

Writer Huma Qureshi of gal-dem, a publication that focuses on women and non-binary voices, wrote that as a South Asian woman she quit yoga because she felt like the classes were “white-washed” and excluded her heritage.

READ MORE:
People of colour have always loved the outdoors, and Canadian companies are noticing

For McKenzie and Knight, one of their top priorities was ensuring their yoga instructors were women of colour, and conversation and discussion was encouraged during classes.

McKenzie says wellness can also revolve around group interaction. “We wanted it to be a warm space where people can feel like they belong,” she said.

People of colour can feel excluded and not represented often, whether it’s at work or in other public spaces, said Janelle Joseph, an assistant professor of kinesiology and education at the University of Toronto.

Seeking out a space that’s free from oppression when you’re looking to engage in exercise or wellness can be important, she said. This can be especially true with yoga — in a studio, you become hyper-aware of how everyone looks in the space and how they move.

“Especially in yoga culture, the primary position is not only white and female, it’s also skinny,” she said. “Women of many different races might feel out of place in these yoga spaces, even if they are made to be inclusive.” 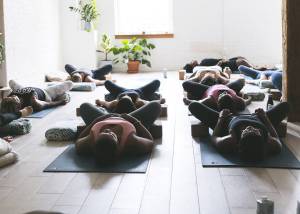 TrapSoul Yoga run by The Villij at the Good Space studio in Toronto. (Photo by TruCreates)

The wellness boom with a focus on “self-care” is also tied up with those who can afford individualized, performative methods of care like expensive spa days and a membership to an upscale gym, she said.

This is why spaces that encourage people of colour to engage with wellness are invaluable, Joseph says, because exclusions will be felt unless a studio actively engages in anti-oppression techniques.

For Toronto-based yoga instructor Nadia Walters, her love for yoga began more than a decade ago.

However, she found many instructors were not Black women like her, and she hesitated to even identify herself as an instructor.

“In that environment, I never felt good enough to teach,” she said. It’s what led her to start Hip Hop Yoga 101, a class that promotes inclusivity along with the music, she said.

Walters says changing what’s offered in studios or being more mindful of who’s attending your classes can help with creating a more inclusive space.

Julia Gibran from Scarborough, Ont., is a yoga instructor and social worker who has interacted with yoga as a practice for much of her life through her family.

She too says dealing with yoga studios that were overwhelmingly white sometimes made her feel uneasy and confused as a West Indian woman.

“I felt a bodily discomfort learning about the philosophies of yoga from someone who didn’t look like me,” she said, adding that the concepts behind yoga have been sometimes watered-down in the West.

READ MORE:
The science behind the effects of yoga on health

It’s important to create spaces where people can feel connected to their culture through yoga, especially ones that are more accessible and work to decolonize the practice, she said.

Western yoga teachers can work to reduce harm by working to understand the roots of yoga and allow for conversations about appropriation to happen in a safe environment, she explained.

“It’s so important for people of colour to have spaces where they feel seen, heard and can talk about … the experience of being in classes where they are the only person of colour,” she said. “I think the healing comes from talking about it.”