WATCH: As COVID-19 restrictions ease warnings are being sounded about a 'second wave.'

The first wave of the coronavirus in Canada is winding down as the number of daily cases continues to decline.

Cities across the country are also starting to lift restrictions, leading more Canadians to flock outside and enjoy the summer heat. But with the relaxation of lockdown rules (not just in Canada but around the world), officials are warning about a resurgence of COVID-19 cases.

“This virus can accelerate really quickly. We’ve seen it accelerating really fast in that first wave. We have to be really cautious because it might not take much for another chain of transmission and escalation to occur,” she said during a media conference on May 21.

If Canada is still in the first wave of the pandemic, when does it officially end? And how do we know if we’re in a second wave?

What is a pandemic wave?

Steven Hoffman, professor at York University in Toronto and director of the Global Strategy Lab, said using the term “wave” is an oversimplification but can help act as a visual cue.

Waves describe the curve of an outbreak, reflecting the rise and fall in the number of cases. In becomes a defined period. For example, the common cold sees a crest of cases in the cold winter months and a drop when the warmer weather appears.

In order to say one wave has ended, the virus would have been brought under control and cases fallen substantially. For a second wave to start you would need a sustained rise in infections, Hoffman said.

In Canada’s situation, he said ideally that number would be brought down to zero.

“This means there is no official start or end of a wave. It’s just a useful descriptor of a time period during which there is first a surge and then a drop in cases that looks like a wave on an epidemic curve,” he said.

Looking at the nation’s data, their first wave lasted about one month. There was a quick surge followed by a quick drop. Looking at Canadian data, we have experienced a much longer first wave, Hoffman said. He added that we are “still in the tail end of it, lasting three months and counting.” 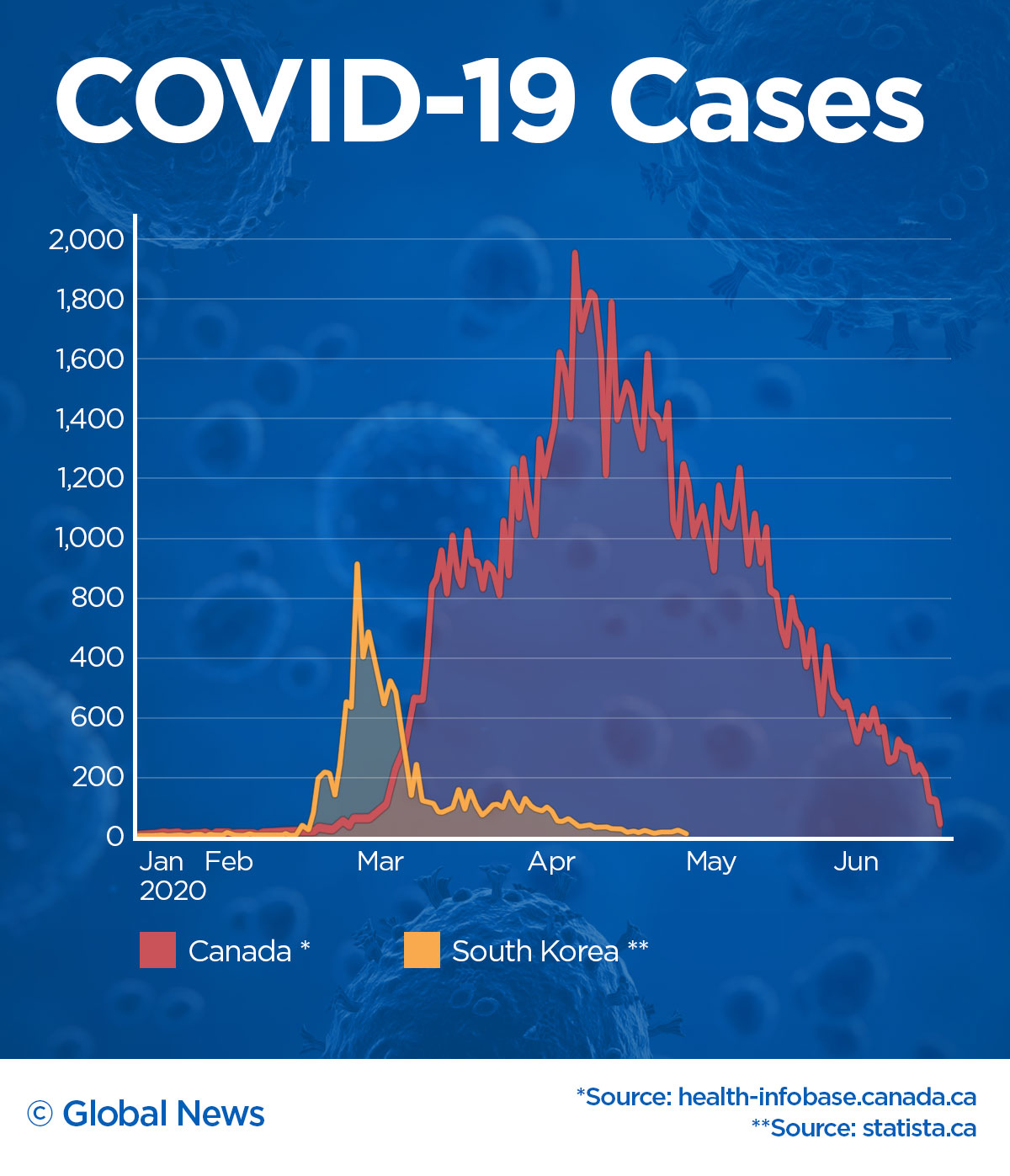 But using the term “wave” can be misleading, he said.

“There are a few countries where the data looks like an actual wave, such as South Korea and Canada. But in some countries, one wave will merge into another,” he said. And in these cases, the data does not look like a wave at all.

An example of this is the United States, which recently has had a resurgence of COVID-19 numbers in states such a Florida and Texas. On Thursday, the governor of Texas temporarily halted the state’s reopening as COVID-19 infections and hospitalizations spiked and the United States set a record for a one-day increase in cases.

Naomi Rogers, a professor of the history of medicine at Yale University, said people should be cautious when a “wave” is deemed over, as there is no strict definition.

“In the past, the people who claimed an outbreak was ending were very often politicians and business officials,” she said. “The bubonic plague in San Francisco is an example of this.”

She added that we need to think more thoughtfully when it comes to deeming a “wave” over.

“The notion of waves is a very useful construct we are struggling with. We try and use it in order to make sense of an idea that cases appear, they decline, and they then reappear,” Rogers explained. “For some places, like some states in the U.S. they kept climbing. So how do you call it a second wave when you’re still in the first?”

Fears about a second-wave of COVID-19 may have stemmed from the 1918-20 Spanish flu, Rogers said. The virus infected 500 million people worldwide and reportedly killed an estimated 20 million to 50 million.

It first appeared in the spring of 1918 but appears to have mutated when it surged again in the fall, making for a deadlier second wave.

To many epidemiologists, using the term “second-wave” it is a matter of semantics.

Dr. Eric Toner, a senior scientist at the Johns Hopkins Center for Health Security, told Reuters he does not find “waves” to be an especially useful term in describing a pandemic.

“When you’re underwater, it’s hard to tell how many waves are passing over your head,” Toner said.

Toner said current increases in U.S. cases have less to do with the virus and more to do with people’s behavior.

“The virus isn’t going away and coming back. The virus is still here. It’s up in some places and down in others.”

As of Friday, more than 9.5 million people worldwide had tested positive for the coronavirus, and more than 489,000 had died, according to the European Centre for Disease Prevention and Control.

And while medical knowledge has improved, doctors continue to emphasize that the best way for people to survive is to avoid infection in the first place through good hygiene, use of face coverings and limited group interaction.

“ we may not get a second wave, or we could get a third, fourth or fifth one,” Hoffman said.

“The key is to be ready for all possibilities,” Hoffman said. “Citizens should be mentally prepared that some of the layers of protection that are just getting lifted might need to be reimposed.”

— With files from Reuters