An exclusive investigation by Global News reveals that some Canadian terrorism convicts released from prison still pose a threat to the public.

A woman imprisoned for an ISIS-inspired attack at a Toronto Canadian Tire store has threatened to conduct another terrorist attack once she is released from prison, documents obtained by Global News show.

“If you release me from jail, I will do another terrorist attack, so tell your government to send me back to my country (Syria),” Rehab Dughmosh wrote in a note to her parole officer in February.

The incident was one of several cited by the Parole Board of Canada in a decision Monday denying Dughmosh’s bid to be released on parole. The ruling followed a review on Thursday.

“Given your continued commitment to a terrorist organization, and ongoing indications that you will commit a terrorist attack if released, the board do not consider your risk to re-offend violently is manageable at this time,” the decision read.

Although Dughmosh was sentenced to seven years in 2019 for trying to join ISIS and carrying out an attack in Toronto in the terrorist group’s name, she became eligible for full parole on Aug. 7.

But the parole board decision chronicled a long list of concerns, many stemming from her allegedly ongoing support for ISIS, and found that releasing her would pose an undue risk to society.

“You have been found with a terrorist flag image in your cell, asked the imam for radical literature, and confronted another Muslim offender for not wearing a hijab,” the board wrote.

A psychological risk assessment dated June 2 noted “ongoing concerns,” including “advocating for the death of infidels, having a desire for retribution” and “seeking martyrdom,” the board added.

As a result of her prison behaviour, her security classification was increased to maximum in November, the board said. Her reintegration potential was also rated low.

She has accumulated institutional charges for disobeying rules, fights, assaults and threats.

“You have no pro-social associates, lack employment prospects and financial resources, your motivation for further intervention is low, and you continue to believe it is acceptable to use violence as a method of achieving your goals,” the board members wrote.

A Syrian-born former dental nurse and science teacher, Dughmosh was sentenced on Feb. 14, 2019 for leaving Canada to participate in terrorism, two counts of assault and carrying a weapon — all for the benefit of ISIS.

Justice Maureen Forestell said Dughmosh’s mental illness, which was likely related to schizophrenia, had “rendered her vulnerable” to extremist beliefs and played a key role in her actions.

According to an Agreed Statement of Facts, Dughmosh left Toronto in April 2016, intending to join ISIS in Syria, but her brother tipped off the RCMP and she was turned back by Turkish authorities at the Istanbul airport.

The RCMP questioned her once she returned to Toronto, but she claimed she was travelling to Syria to visit family and police decided not to lay charges and closed their file. 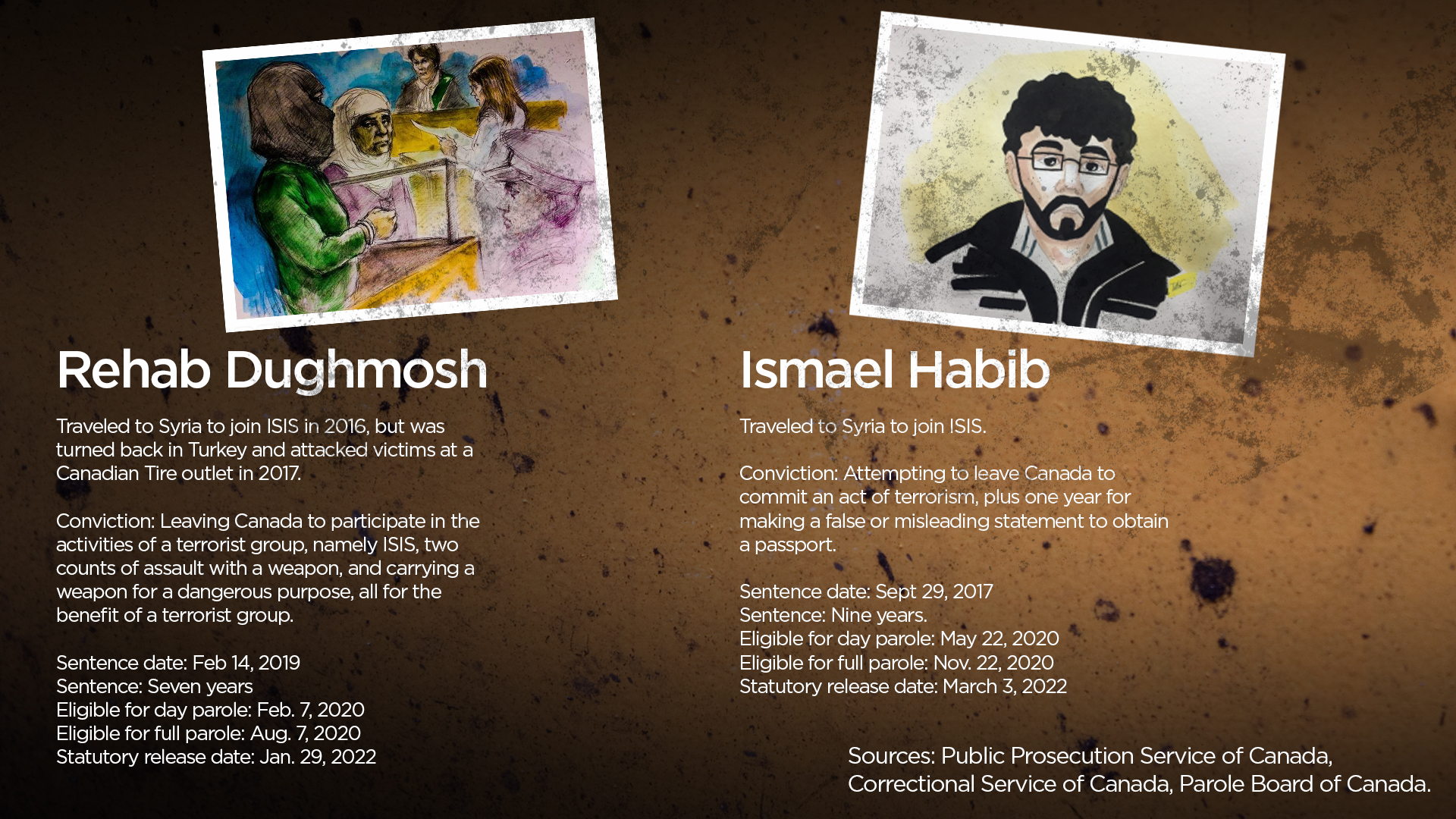 In 2017, she decided to conduct an attack in Toronto and began accumulating weapons, including a compound bow and arrows. She also made her own weapons — handles with protruding screws.

Using black spray paint, she made an ISIS banner and, on June 3, 2017, concealed the archery bow and an eight-inch butcher’s knife under her robe and set off to conduct her attack.

She walked into the Canadian Tire at Cedarbrae Mall in Scarborough and went to the sporting goods section, asking to see a set of arrows, but an employee would not give them to her.

She then went through the aisles, collecting tools such as a hammer, as well as a golf club. At 5:12 p.m., she took out her ISIS banner and put on a black bandana that sported the ISIS logo.

She took out her bow and charged employees in the paint section, shouting “Allahu Akhbar” and “This is for ISIS.” She held the knife and swung the golf club at one worker but staff eventually wrestled her to the ground.

“I’m coming to kill you,” she told the employees holding her down until police arrived. “Yes, when you kill Muslims you have to pay for it from your blood … You’re killing ISIS, I’m from ISIS.”

Nobody was seriously injured.

During questioning the next day, she told the RCMP’s Integrated National Security Enforcement Team she was happy about what she had done but disappointed nobody was hurt.

“She said the people at Canadian Tire are not Muslims, and the Quran instructs us to kill every non-Muslim kuffar until they convert or submit to the Islamic State,” according to an Agreed Statement of Facts.

The police search of her residence turned up a handwritten will that read: “As long as there is disbelief and Islam on Earth, so jihad will exist and his sword will not be sheathed until … Allah cleanses the Earth of them and their disbelief.”