Feds' COVID-19 vaccine supply may not be enough to keep up with provinces, data suggests

As officials point forward to millions of incoming COVID-19 vaccine doses, current vaccination data analyzed by Global News suggests that federal vaccine deliveries are falling short of provincial administration rates — with some very close to doling out nearly all of the vaccines delivered to them so far.

Provincial vaccine utilization rates, also known as the percentage of vaccines administered out of all deliveries, appear to accelerate significantly after new vaccines are delivered and provinces are able to draw on new inventory, according to data compiled by covid19tracker.ca.

Some provinces, however, appear to start off every week with increasingly high daily dose numbers but taper off immediately as utilization rates there increase and available doses dwindle, suggesting that federal deliveries aren’t enough to keep up with provinces’ capacity to administer vaccines.

Earlier this week, over 1 million doses of Pfizer-BioNTech and 650,000 doses of Moderna were delivered and put into inventory across the country, which are indicated as upward ticks in daily doses starting April 26. Similar trends can be seen dating back on a week by week basis as well, provinces recording increasing amounts of jabs once they get new vaccines, and taper off later in the week. 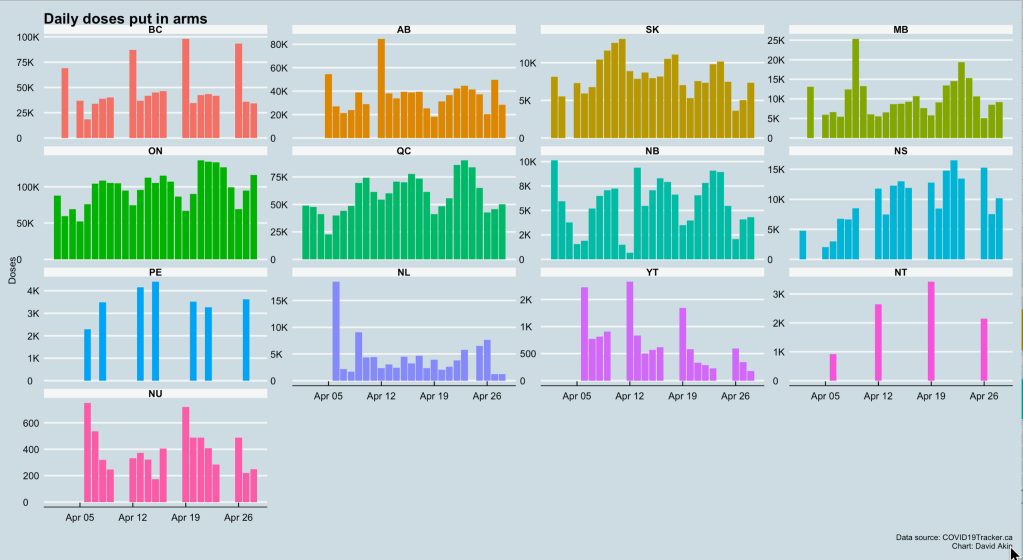 Visualizing the data in charts dated between April 1 to April 28, most provinces see their utilization rates dip and then spike after receiving new vaccines, though the data also points to another problem that may arise should Canada experience anymore unforeseen delays in vaccine shipments.

Provinces like Saskatchewan, Alberta, Quebec, B.C., New Brunswick and Ontario are close to or have already surpassed 90 per cent of their utilization rates — meaning that they may soon run out of vaccines to administer.

This week, for example, saw Canada receive only half of its promised 1.3 million doses from Moderna, which provinces blamed for cancelled vaccine appointments. 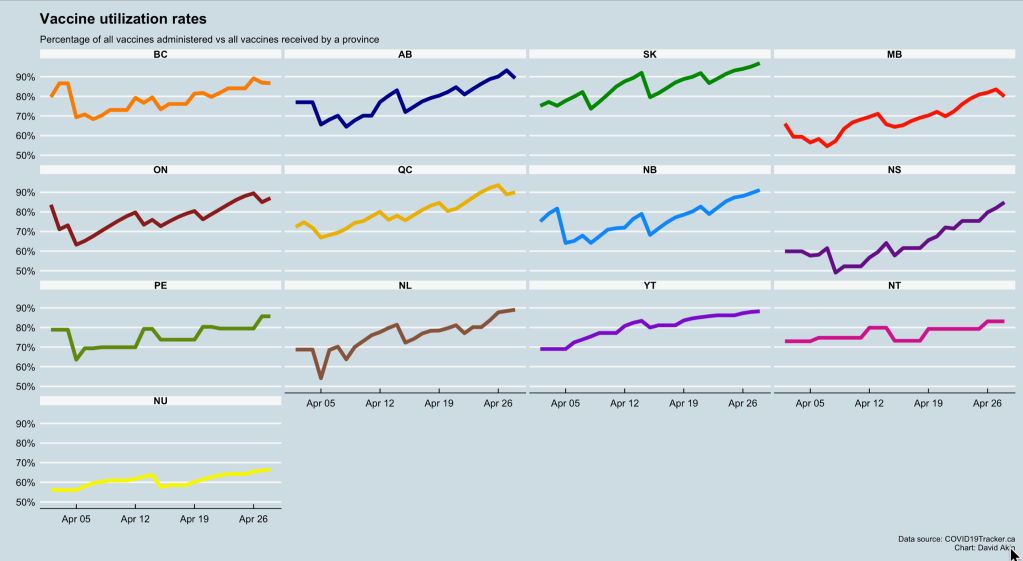 The Public Health Agency of Canada (PHAC) did not immediately respond to Global News’ request for comment, but made comments earlier assuring Canadians that millions of vaccine doses were still on schedule for delivery in the coming weeks.

In a press conference Thursday, Maj.-Gen. Dany Fortin, the officer overseeing vaccine distribution for PHAC, said that Canada was set to receive more than two million vaccine doses from Pfizer next week.

Another one million doses of Moderna were also set to arrive and be distributed across the country to in the next two weeks, while J&J’s first delivery from Thursday would be distributed next week once thawed.

Provincial leaders have welcomed the increased vaccine numbers, and have released new plans to increase vaccinations over the next few months.

Ontario, for example, released new plans allowing everyone over the age of 18 to book a shot by May 24, while Quebec said jabs for that age group are expected be available come May 14.

— With files from The Canadian Press