Several states across the U.S. moved quickly to ban abortion Friday in the hours after the Supreme Court voted to overturn the legal right to access established by Roe v. Wade.

Thirteen states have so-called “trigger laws” on the books that were written to go into effect as soon as the landmark precedent fell. Some of those states wasted no time ensuring those bans were in place after Friday’s ruling.

Pregnant women considering abortions already had been dealing with a near-complete ban in Oklahoma and a prohibition after roughly six weeks in Texas. Clinics in at least five other states — Alabama, Kentucky, Missouri, Wisconsin and West Virginia — stopped performing abortions after Friday’s decision.

Here’s a look at which states have moved to ban abortion following the court ruling. 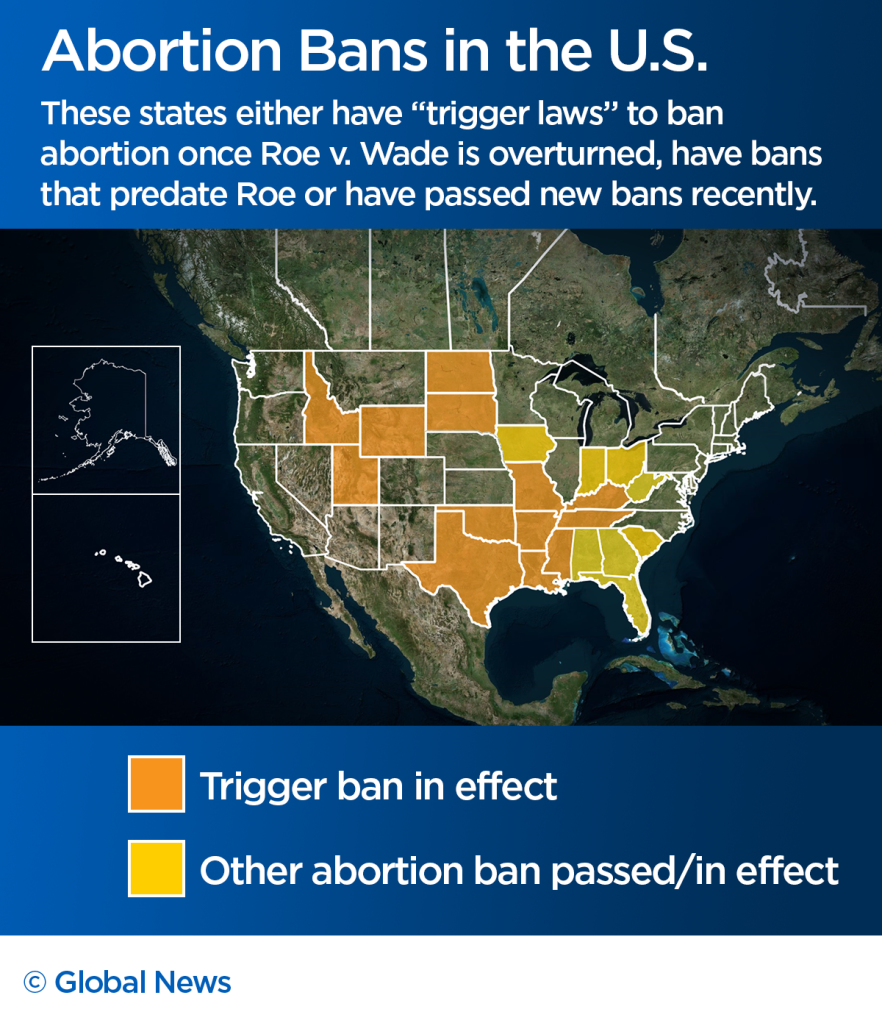 States that have trigger laws in place — including Texas, Oklahoma, Kentucky, the Dakotas and Idaho — require their attorneys general to sign off on enforcing the bans.

Louisiana Attorney General Jeff Landry confirmed shortly after the Supreme Court’s decision that his state’s trigger law banning all abortion is now in effect, though a state judge temporarily blocked it on Monday.

Oklahoma began the process of invoking its trigger law Friday, and other states, including Kentucky, Ohio and West Virginia, said they were beginning work on their own trigger bans.

Only some of those laws make exceptions for rape and incest, while most say they will allow abortions only if the mother’s life is at stake if they try to give birth.

Mississippi’s only abortion clinic, which was at the centre of Friday’s case, continued to see patients Friday. Outside, men used a bullhorn to tell people inside that they would burn in hell. Clinic escorts wearing colourful vests used large speakers to blast Tom Petty’s I Won’t Back Down at the protesters.

While that state also has a trigger law, the state’s ban on abortions after 15 weeks was upheld by the Supreme Court in its decision. Attorney General Lynn Fitch did not say if she would move to enact the trigger ban.

In Texas, providers wondered which law they had to follow: a 1925 ban, a 2021 law that limits abortions to the first six weeks of pregnancy, or a trigger law that bans the procedure outright, but wouldn’t take effect for a month or more. The confusion led them to suspend abortions while they seek legal advice.

Wisconsin and West Virginia, two of the states where clinics stopped performing abortions after Friday’s decision, both have laws on the books banning abortion that date back to the 1800s.

Clinics in those states said they stopped performing abortions because of these laws, which will now be at the centre of renewed political and legal fights.

West Virginia Gov. Jim Justice, a Republican, said he will not hesitate to call the Legislature into special session if the ban needs to be clarified.

Wisconsin’s Democratic Gov. Tony Evers lamented on Friday that his effort to repeal his state’s ban was rejected by the Republican-controlled legislature on Wednesday. He and his Democratic attorney general have vowed not to enact the law, however.

Another outlier is Michigan, which has a law dating back to 1931 that bans abortion outright but has not been enforced. Democratic Gov. Gretchen Whitmer renewed her call Friday for the state Supreme Court to repeal that law, and promised not to enforce it if it stays in place.

Meanwhile, Alabama Attorney General Steve Marshall said laws “that have not been (stopped) by a court” are in full effect, appearing to refer to a 1951 ban on abortion that predates Roe.

Gov. Kay Ivey also vowed to ask a judge to lift an injunction on Alabama’s separate, near-total ban, which was passed in 2019.

The state’s three abortion clinics stopped performing the procedure for fear providers would now be prosecuted under the 1951 law.

At the Alabama Women’s Center for Reproductive Alternatives in Huntsville, the staff had to tell women in the waiting room Friday morning that they could not perform any more abortions that day. Some had come from as far away as Texas for an appointment.

“A lot of them just started breaking down crying. Can you imagine if you had driven 12 hours to receive this care in this state and you are not able to?” clinic owner Dalton Johnson said. Patients were given a list of out-of-state places still doing abortions.

States that have more recently passed abortion bans that were blocked by lower courts are now moving to remove injunctions on those laws following the Supreme Court ruling.

Georgia’s attorney general filed to lift a stay on the state’s 2019 “heartbeat bill,” which bans abortions once a fetal heartbeat is detected — usually just after five weeks after conception and before many women know they are pregnant.

In Arizona, Attorney General Mark Brnovich said a new 15-week abortion ban similar to Mississippi’s will go into effect within 90 days of the ruling. He did not mention if his state’s pre-Roe law that bans all abortions will be enacted.

Abortion providers across Arizona still stopped doing procedures while they tried to determine if that 1912 law means doctors and nurses will face prison time now.

Florida also has a 15-week ban on the books that was passed in April. Gov. Ron DeSantis said the state will defend the bill from legal challenges in state courts, a campaign that is likely to succeed following the Supreme Court ruling.

Just moments after the court’s decision was announced, Virginia Gov. Glenn Youngkin, a Republican, said he will seek legislation to ban most abortions after 15 weeks of pregnancy, but it’s unclear how such a bill would fare in a very closely divided legislature.

Other conservative-leaning states like Indiana, Nebraska and Kansas have indicated they will move to restrict abortion now that the Supreme Court has spoken.

Kansas voters will consider a statewide referendum in August that would eliminate legal protections on abortion that were enshrined by the state Supreme Court. 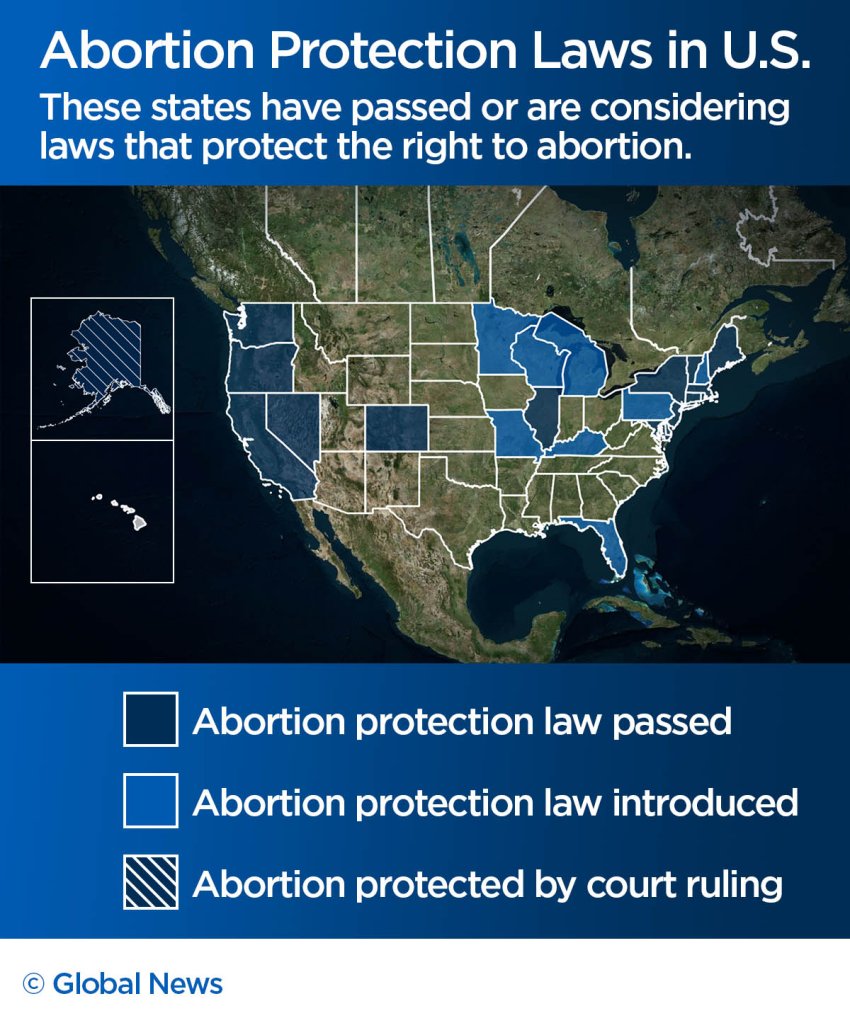 Sixteen states and the District of Columbia have passed some form of legislation that ensures abortion is a protected right under state law.

At least seven of those laws have only passed within the last two years, as the prospect of Roe being overturned intensified. Protection laws in Washington state and Maryland, for example, won’t take effect until July.

The Democratic governors of California, Washington and Oregon on Friday vowed to protect reproductive rights and help women who travel to the West Coast seeking abortions following the Supreme Court’s decision.

The states issued a joint “multi-state commitment,” saying they will work together to defend patients and medical professionals providing reproductive health care.

They also pledged to “protect against judicial and local law enforcement cooperation with out-of-state investigations, inquiries and arrests” regarding abortions performed in their states.

–With files from the Associated Press